Kiki’s Delivery Service is a super cute story about a witch, Kiki who is 13 and ready to continue her training as a witch. I remember being a child and thinking about what it would be like to fly. And no, not in an airplane or a gas air balloon, but like a bird, or in this case, like a witch on a broomstick. Watching Kiki fly away like that, was super blissful and definitely got me thinking about how cool it would be to be a witch.

Now witches they say are to leave their homes when they turn 13 and undergo witch training by living independently for a year. So Kiki on turning 13 packs her bags, gets her cat on board, and gets on a broomstick to fly far away. Quite an adventure I’d say.

Kiki, her cat Jiji & a broom, and off they go. Flying on a broom, playing music on their radio, the two are off on quite a start. The two fly over towns and fly high in the sky right till they find a town that feels right. Soon Kiki spots a town, one with an ocean view, just like she wished for. Kiki & Jiji enter the town flying on their broom and of course, their arrival turned many heads.

It seems as though, no witch had lived in that town before. Initially, people don’t seem to really understand Kiki & why she’s flying on a broom. In fact, the first few minutes in, a cop even decides to fine her for disrupting the traffic.

But soon enough, she meets this really nice lady, who gets her. Who doesn’t question her for being a witch or flying on a broom? The kind lady, Osona runs a bakery, called Gütiokipänjä Bakery. And one thing leads to another, she offers Kiki a place to stay in her attic.

Because she absolutely loves to fly, she decides to start a Flying Delivery Service. Osona and Kiki make a deal where she looks after her shop and gets to stay in the attic, use her shop phone & get a free breakfast in return. And before you know, Kiki is in demand and flying across towns to deliver precious parcels.

It is Kiki & Jiji’s first flying delivery, for a lady who wishes to send a stuffed cat as a present. While they are at it, the weather gets shaky and they end up dropping the stuffed cat in the middle of a jungle. As soon as they head back to look for it, the crows attack them. Certain about not messing up her first delivery, Kiki comes up with a plan.

Since Jiji looks just like the stuffed cat, he is given away as a present. Meanwhile, Kiki heads back to the forest to look for the stuffed cat. And that’s how she meets this girl, Ursula. Ursula lives in a wooden cabin in the forest. She paints and spends her time with the crows. Kiki takes the stuffed cat back and rescues Jiji from the party. She makes a good first delivery & finds a friend in Ursula.

On her first day, Kiki met this boy, who she first thought was quite rude. But Tombo, the 13-year-old boy who is charmed by her amazing flying skills doesn’t give up. One day he arrives at the bakery and invites her to a party.

But on the day of the party, Kiki is caught in the rain and gets delayed. Later that night, because of all the rain and cold, she catches a fever. Once Kiki recovers, Osona asks her to deliver a parcel and it turns out it's a parcel for Tombo. So the two end up spending time together and Kiki, who initially thought that he was a bit of a clown, realizes he’s a good guy.

Then the worst happens,

The next day, her world turns upside down. She can’t understand what Jiji is saying and is unable to fly anymore either. She’s worried that she might be losing her witch powers.

Sometime later, she bumps into Ursula, who has come all the way to visit her. The two decide to escape for a while and head to her cabin in the woods. While spending time with Ursula she realizes how she needs to take the time out to re-connect with her spirit.

Kiki to the rescue.

The next day though, an accident happens back in town. The airship begins losing helium and somehow Tombo ends up on a rope, hanging from the airship. While everyone is praying for his safety, Kiki decides she needs to save him. Hoping that her flying powers cooperate she gets on a broom and tries as hard as she can to get to him. And just like that, her flying powers come back and Tombo is rescued. The movie in a way tells us about not losing ourselves in our work. To keep the fire alive and find our joy. 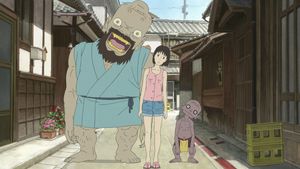 Daki and Gyutaro, siblings of the other side

List of 10 Upcoming New Kdramas in June 2022 Worth Watching!

Which One Piece Character Is The Closest To Your Mbti?

Is Rai The Strongest In Noblese Manhwa?

Catalytic sound and echo in a parallel world attacked by bubbles

How Was Yukari Yukino Different From Other People?

Kimi No Na Wa: Connecting... Across Time; One Of The Most Captivating Anime Movies In The 21st Century?