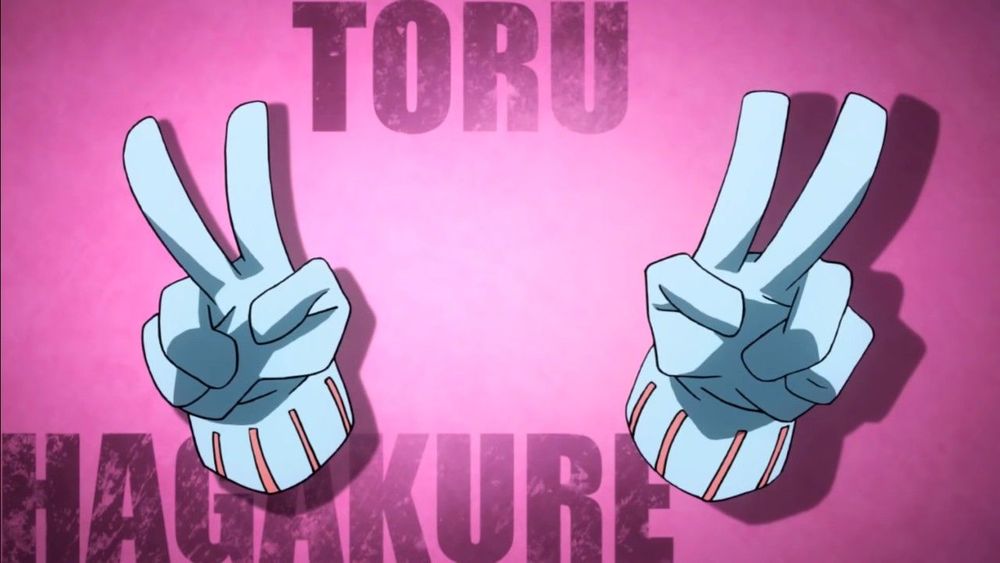 Toru Hagakure is a student of U.A. High School in Class 1-A. Training to be a Pro Hero under Aizawa sensei.

There is nothing to say about her appearance with her Invisible Quirk. She can be identified because of the clothes she wears in school or in the dorm. Her hero costume is only of a pair of light blue gloves and lace-up shoes in light brownish-gray color.

For winter her costume consists of thicker gloves and plain knee-high boots.

Toru Hagakure’s costume originally had more than just a pair of gloves and boots. The original design had a mask with a smiling face on it. Additionally, her gloves were designed to have mirror-like objects.

There has not yet been any discussion about her real appearance. So let’s just wait for the big reveal.

Toru appears to be very social with a cheery and easygoing personality. She likes cute things like plushies as seen in the room reveal episode.

During the mission, she believes taking off her clothes is a tactical move courtesy of her invisible quirk. This often leads to awkwardness for her as well as people around her.

She is often embarrassed at the idea of being seen when undressing. I doubt she understand how Invisibility exactly works.

As we know, Toru Hagakure has the invisibility quirk. Her quirk is not the type where she can become invisible as per her choice. Toru’s quirk makes her completely invisible from the beginning.

Toru Hagakure’s quirk capable her of stealth. She can bypass visual detection which makes her ideal for a spy. She trained herself in being stealthy by practicing against the sensory-efficient Mezo Shoji.

This also helps her during combat. She can approach her opponent without being found out and then attack them directly.

Toru also evolved her invisibility and developed “Warp Refraction”. By developing photo kinetic characteristics of her quirk, she manipulates light. Refracting the light inside her, she increases its intensity and effectively stuns her opponents.

She came up and developed this super move during the Provisional Hero License Exam.

She also improved and polished her “Warp Refraction” during her internship.

Toru is also a good comrade. She uses her abilities to support her comrades by initiating surprise attacks. Evidence of this is the Term Final Exam. When Mezo Shoji and Toru had to win against Snipe to pass the exam, they utilized Toru’s invisibility.

Toru was originally supposed to be a male character. However, Horikoshi changed it because of the lack of female characters in Class 1-A.